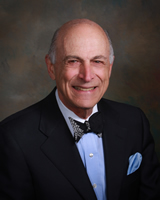 Professor Howard Maibach was educated at Tulane University, New Orleans, Columbia University in New York and at USPHS, the Hospital of the University of Pennsylvania where he graduated in dermatology in 1961. He was appointed Professor, of the Department of Dermatology at the University of California, San Francisco in 1973 where he remains until this day. He also holds honorary degrees from L’Université de Paris-Sud, Université Claude Bernard Lyon 1, Lyon, France and Syddansk Universitet, Denmark.

Howard is an expert in occupational and contact dermatitis and still sees patients at The Environmental Dermatoses Clinic, part of the Dermatology Clinic at UCSF. His most active fields of research are in dermatopathology, dermatotoxicology and environmental dermatoses and he has been doing human subject research for over fifty (50) years.

He has been on the editorial of more than 30 scientific journals. His bibliography includes 3,075+ manuscript and over 150 books. This may well be a world record number of publications for one person!

He is a member of 19 professional societies and organizations including the American Academy of Dermatology (AAD); San Francisco Dermatological Society (SFDS), American Dermatological Association (ADA), North American Contact Dermatitis Group (NACDG), American Contact Dermatitis Society (ACDS), was a founding member of the ICDRG which started in 1967, European Environmental Contact Dermatitis Research Group (EECDRG), Society of Toxicology (SOT) and the International Commission on Occupation Health. He has also participated in the yearly International conference of the Perspectives in Percutaneous Penetration held in Grand Le Motte, France. He is a consultant to government, academia and industry worldwide.

The American Academy of Dermatology (AAD) honored Howard as the recipient of the Academy’s 2013 Master Dermatologist Award held at their Annual Conference in Miami, Fl. This prestigious award recognizes an Academy member’s significant contribution in the field of dermatology and to the AAD. At the 2017’s AAD’s 75th Annual Conference, Dr. Maibach was the recipient of their Presidential Citation in recognition of his signification contribution and dedication to both the Academy and the specialty of dermatology. The International League of Dermatological Societies (ILDS) awarded Dr. Maibach their 2014 Certificate of Appreciation in recognition of his outstanding contribution to Dermatology, both nationally and internationally, through his work, research, publications and teaching in the USA and over 60 countries.

Howard has made an immense contribution to dermatology, but is perhaps best remembered for mentoring young researchers from all parts of the globe, and for being so ready, willing and able to give advice and share his wisdom, to all who seek it.